Climate Feedback has just posted a response to some comments Rand Paul made about the Paris Agreement; they’ve also posted very similar content in response to Ted Cruz and Trump himself. While these articles by themselves are irrelevant, I consider a rebuttal worth the effort, as the same or a very similar version of their main ‘argument’ (i.e. fallacy) is appearing in outlet after outlet.

Here’s the thing the emission-cutters hardly ever acknowledge: emissions depend on the economy. Generally speaking, the more an economy grows, the more CO2 it emits.

Now, raise your hand if you know how big global GDP will be the rest of the century.

Nobody? Okay. The problem is, if you don’t know how big GDP will be, you don’t how big emissions will be, either.

All these ‘business as usual’ scenarios and ‘baselines’ for emissions are nothing more than worthless, pointless handwaving. Nobody knows what would be the ‘normal’ emissions in a no-climate-policy world, because nobody knows how much the economy will grow.

There is a way around this uncertainty, however. By definition, emissions are equal to GDP divided by the CO2 efficiency of GDP (just like fuel consumption equals mileage divided by fuel efficiency). Advocates of emission cuts are always claiming these don’t hurt the economy and sometimes even say they will increase the rate of GDP growth. So, if climate policies don’t work by making GDP smaller (than it would otherwise be), they can only work by making it more CO2-efficient.

(Yes, this is essentially a repeat of the argument/explanation I used in this article. But the people wailing about Trumps’ decision on Paris haven’t read it, so it’s worth saying again).

Notice that some warming will happen between now and the end of the century even if greenhouse gas concentrations don’t rise at all, because we have an energy imbalance of about 0.7 w/m2. This imbalance will tend to decline as the Earth gets hotter; when atmospheric temperatures rise, we release more infrared radiation, thus reducing the imbalance and driving the Earth closer to an energy equilibrium. (Notice that an actual equilibrium may never arise, and it may take centuries for the current imbalance to decline to, say, 0.2w/m2. Which is to say that this ‘warming in the pipeline’ will be pretty slow).

The question isn’t how much total warming we’ll see between now and 2100, but how much additional warming can be avoided by increasing the CO2 efficiency of GDP. In my previous article I showed that the rate of decarbonization plunged right after the Kyoto agreement was signed. Success! 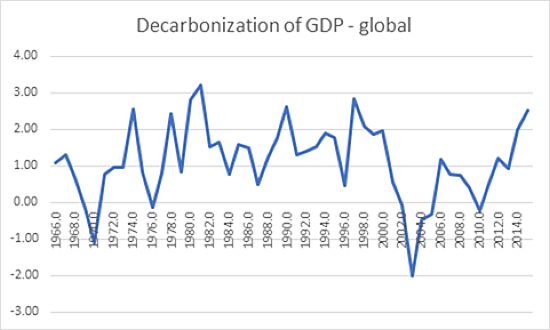 (By the way, this slowdown in the gradual increase of CO2 efficiency remains even if one looks only at countries that actually signed the Protocol).

The US is getting mocked now for joining Syria and Nicaragua as the only non-signatory of the Paris agreement. Those doing the mocking and sneering said pretty much the same thing about Bush’s withdrawal from Kyoto back in 2001 – guess what happened to emissions? 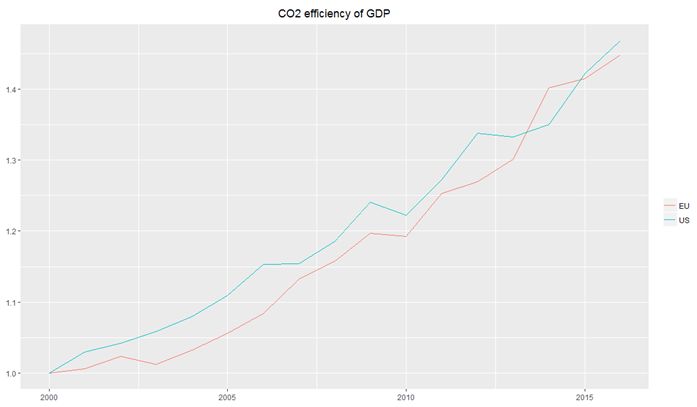 Right: emission efficiency increased faster in the US than in Europe! Notice that this phenomenon predates Obama and the shale gas boom.

That’s climate politics for you. Whether results get better or worse after an agreement is irrelevant – what matters is signing a piece of paper. Likewise, for the condescending, sanctimonious agreement advocates it doesn’t matter that the US under Bush actually outperformed the European Union – all it matters is that this heretic government didn’t sign Kyoto.

So how much of an improvement in the decarbonization rate was built into the Paris pledges? It’s impossible to say with precision. But it’s fair to say that, outside the US and the EU, which did submit aggressive emission reductions pledges, most of the nations simply agreed to keep doing what they were already doing and would have done anyway.

Now back to Climate Feedback. The core of their argument, against both Paul and Cruz, is this:

‘Business as usual creates an emission trajectory that rapidly passes by 80 gigatons of CO2 per year by 2070; the likelihood of seeing warming less than 3 °C through 2100 along this path is 10% with a median of more than 4 °C.  Abiding by the Paris Accord through 2030 and continuing its momentum through 2100 would increase that likelihood to nearly 60% with a median somewhere around 2.5 °C – a reduction of approximately 1.5 °C and not 0.2 °C’

They accompany the text with this chart:

Very well, according to Gary Yohe writing for Climate Feedback, if we follow the Paris pledges emissions by 2070 will be about 40 billion tons of CO2 per year; if we don’t follow it emissions will be 80 billion tons. It seems his ‘business as usual’ is the RCP 8.5 scenario, though to be honest I can’t be bothered to check and it doesn’t matter a wit.

Now do some arithmetic. What Yohe is claiming is that, for a given GDP, emissions in one case will be 50% lower than in the other; this is the same as saying that the CO2 efficiency of GDP will be double what it would be under a ‘no action’ scenario.

Chew on that for a second: twice as efficient!

The historical rate of decarbonization is 1.1% a year, so by 2070, which is 53 years away, we would naturally increase efficiency by 78.6% just by doing nothing; what Yohe is saying is that, following Paris, our efficiency would instead increase by 257.2% (because 178.6 x 2 = 357.2). In order to do that, we would have to more than double the decarbonization rate; specifically, it would have to 2.4% instead of 1.1% (an increase of 1.3%). Given the absolute failure of Kyoto, and the failure of supposedly climate-conscious countries like Germany to do much about their own rate of decarbonization, this is pure fantasy. And, even if it were possible, it’s not even close to what was agreed in Paris.

(This is only the first of many problems with Yohe’s chart. I’m virtually sure the claimedreductions in temperature come not only from CO2, but from other greenhouse gases as well. Since the emissions of methane, ozone, N2O, and CO2 from land use are little more than guesswork, and since any major changes in these emissions are therefore unverifiable, including them in any carbon budget is nonsensical. It’s also unclear what’s the sensitivity of the models he’s using; in my articles I used a transient sensitivity of 1.35ºC which is what several surface temperature series suggest. Finally, I’m almost certain his high-emissions scenario has a higher airborne fraction than the others; that is to say, for each unit of CO2 released, a higher proportion stays airborne and contributes to the atmospheric CO2 concentration. In my articles I assumed an airborne fraction of 50% for all emission scenarios, as this is the nearly-constant historical rate; assuming any fraction other than 50% would require disclosure and justification).

Yohe continues with this chart. This is his ‘rebuttal’ to a study cited by both Trump, Cruz and Paul on the economic costs of emission cuts. Instead of actually taking issue with any aspect of the study he essentially claims any emission cuts will not affect GDP, i.e. these two things have decoupled, because emissions used to go up and now they go down. Obviously he hasn’t done the math. 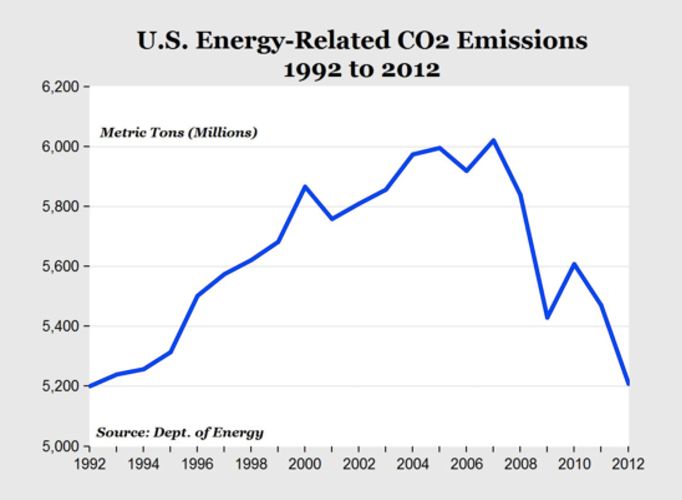 Yes, emissions used to go up and now they go down because GDP used to go up more than it does now. There has been some increase in the decarbonization rate of the US, but not a lot; most the decline in emissions has come from slower GDP growth.

The US used to have, from 1973 until 2000 or so, a rate of decarbonization of 2-2.5%. Since 2008 this has accelerated to 2.5-3%, due to (until 2014) high oil prices and (ongoing) the shale gas boom, which displaced coal generation. So the shale revolution increased the US decarbonization rate by, maybe, 0.5% for the last seven or eight years- yet Yohe believes that a much bigger improvement is possible globally for the rest of the century!

(And of course, displacement of coal by gas is a one-off; it cannot continue until the end of the century because, at the current rate, all coal will be displaced in a few years. There are few if any similar low-hanging fruits in the energy system).

Yohe’s final chart is this. Again, he’s claiming that California, the most ‘climate-friendly’ US state, has essentially decoupled emissions from GDP growth. He couldn’t be wronger. 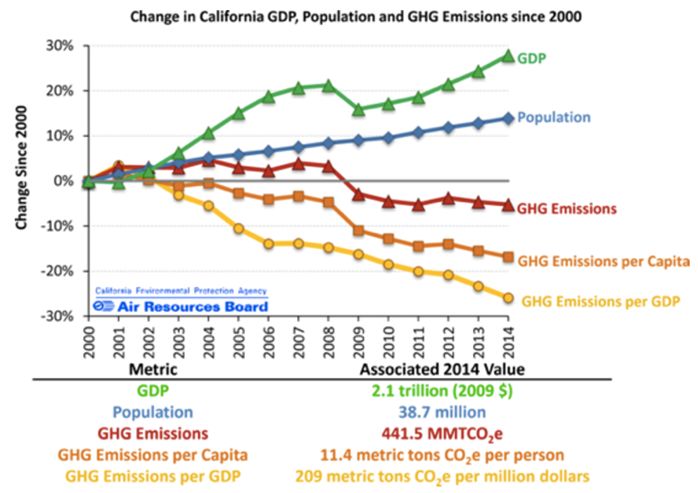 The chart shows a decline in GHG intensity of the economy of 26% between 2000 and 2014; this is equivalent to an increase in efficiency of 35% (because 1 / 0.76 = 1.35). Over 14 years, this is a compound improvement of 2.2% a year. You know what I’m about to say: the United States as a whole did slightly better! Though, to be fair, an apples-to-apples comparison would involve only CO2 emissions, rather than all GHGs. But you get the point: California has done no better than the US when it comes to decarbonizing its economy. And, as noted before, the US has had that rate of decarbonization (or a similar one) for decades.

It’s also worth noting that California passed the Global Warming Solutions Act in 2006… which is precisely when the emissions decline started to slow down!

The rest of Climate Feedback’s ‘rebuttal’ is either: a) matter of opinion or b) pure speculation about the future of energy. I don’t have the time for that kind of argument.

TL; DR: economies are getting more efficient in how much CO2 they release – people naturally try to consume less input for any given result, and energy is an input. But this improvement in efficiency isn’t due to the Paris Agreement, or the Kyoto Protocol, or any other climate boondoggle.

All the charts come from previously-published articles, except for the one that compares US and European CO2 efficiency of GDP. For that chart, GDP data comes from the World Bank and emissions data from BP.

These sources don’t yet have numbers for 2016; I get US emissions growth for that year from the EIA and GDP growth from this website; putting both numbers together suggests carbon efficiency improved by 3.25%. 2016 emissions growth in the EU is sourced from this website, while GDP growth from the region comes thanks to Eurostat. For the Old Continent, the improvement in carbon efficiency of GDP was 2.31%. I simply plugged in these figures (3.25% and 2.31%) to extend the chart to 2016.

This post by Roger Andrews looks at the improvement in CO2 efficiency of several advanced economies. He also fails to find any evidence of climate ‘leadership’ or ‘laggardness’. Furthermore, the idea that economic growth is ‘decoupling’ from CO2 emissions is shown to be wrong.

There are other articles of mine, plus a very good one by The Breakthrough Institute; just follow the links I gave in this article.